It is never too late to start saving your pennies. They used to say “a penny saved is a penny earned.” Well, maybe not so much anymore… 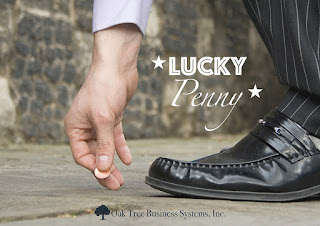 It’s clear that pennies will be part of our history, and the credit union`s history as well. Before you put those pennies in your savings account at your credit union, remind your members to keep one for good luck.

How to count the penny when it is not in circulation

It is common "cents" that prices go up because everything will get rounded up, not down. You would have to account for the penny even though it is no longer in circulation. Rounding should be fair and transparent, and some say it’s best rounding up to the nearest nickel instead of rounding up or down - what do you think? Comment below:

You would no longer be able to lay down a nickel and receive change, but remind your members of your policy about receiving pennies.

Your lucky penny just got luckier - when is the last date to save one?

The Wall Street Journal reported that U.S. Treasury Secretary Jack Lew is considering getting rid of the penny. The Journal noted, the elimination of the penny could be an annoyance for business owners and face the pushback of zinc producers, since the penny is made of 97.5% zinc.

Since the one-cent pieces amounts to such a small value and are often discarded, they are more quickly removed from circulation than other denominations of coin, the Journal reports, meaning more pennies have to be produced by the U.S. Mint than all other coins combined. No decision has been made yet on whether the penny should stay or go, but don’t be too surprised if you hear that the government decides to discontinue the penny anytime now.

What are pennies made of?

The problem of a coin that costs more than it’s worth to produce is what is at hand, but the end of the penny could also create a new age of retail profiteering.

The one-cent coin, commonly known as the penny, was the first currency of any type authorized by the United States, and for over two centuries, the penny`s design has symbolized the spirit of the nation, from Liberty to Lincoln. The design for the first one-cent coin was suggested by Benjamin Franklin.

Did you know that Canada decided back in 2012 to stop making pennies because of production costs and consumers viewing them as largely worthless, and over the years many have called for the U.S. to similarly get rid of the penny? Do you agree with getting rid of the penny?

April 23 is National Lucky Penny Day, and it is a great time to think about the change you get from the store and what to do with those pennies.

Oak Tree Business Systems, Inc. is the credit union`s “luckiest penny.”  We provide lending forms and documents specifically for credit unions, ensuring that members have a great borrowing experience. This saves you time, allowing you to better serve your members` needs. To learn more about how Oak Tree forms can help your credit union, chat with a client services representative on our website or email This email address is being protected from spambots. You need JavaScript enabled to view it.. All that being said, don’t be penny wise and dollar foolish. Invest in your credit union forms today!